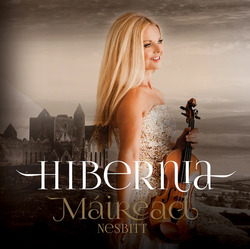 For over a decade, Máiréad Nesbitt enchanted millions of fans around the world as the Celtic violinist and founding member of Celtic Woman. She was the featured violin soloist on 11 Celtic Woman albums, each achieving the coveted #1 slot on the Billboard World Music Chart, an Emmy nomination for the companion television specials and a Grammy nomination for the 2017 “Destiny” album.

For Máiréad, music is truly a life's work. She grew up in a musical family in Co.Tipperary her parents are music educators and all five of her siblings are accomplished musicians. Máiréad began playing piano at the age of four and picked up the fiddle two years later.

Máiréad began her professional career at 16 with the prestigious RTÉ Concert Orchestra, and her playing was featured on the original soundtracks of Riverdance, Lord of the Dance and Feet of Flames, touring the world as lead fiddle player with the Michael Flatley shows. She featured as a soloist on the soundtrack of the Disney film Tinker Bell. She also performed privately for HRH Princess Anne during her visit to Dublin in 2004.

Máiréad has played at the White House, the Pentagon, the Kremlin and in some of the world’s most famous venues and concert halls including Carnegie Hall, Radio City and Hyde Park.

The album is a solo fiddle album with orchestra, percussion (both from percussionists & foot percussion from a group of ‘Set Dancers’) which has never been done with symphony orchestra. This form of dancing is very percussive & primal. The music & dance rhythms for the Hibernia Suite on the album is solely from the Munster area where Máiread grew up.