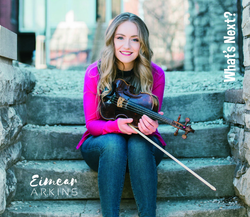 Eimear Arkins is a multi-instrumentalist, singer and dancer from Ruan in County Clare.

She holds eleven solo All-Ireland Fleadh Cheoil titles and has competed in All Ireland, European and World Dancing Championships. Eimear has toured extensively with Comhaltas Ceoltóirí Éireann on concert tours throughout Ireland, Britain, North America and Canada. She has represented Ireland in France as a performer at Rennes Expo and in Spain as a participant in La Noche Negra a cultural collaboration and exchange between the Mid-West of Ireland and the province of Asturias.

In 2014 Eimear was selected to be part of the Comhaltas National Folk Orchestra of Ireland, which was put together to perform the Boróimhe Suite, a newly composed suite of music, written and directed by Michael Rooney, commemorating the life of Brian Ború.

Eimear has performed with the internationally renowned show Brú Ború and was part of the troupe that represented Ireland at World Expo 2010 in Shanghai, China. In August 2015, Eimear traveled to World Expo 2015, in Milan with St. Louis Irish Arts where she promoted not only Irish culture but the expression of Irish culture worldwide.